The cast of Guardians of the Galaxy follows orders from Hollywood PR and throws themselves on the funeral pyre in a vain attempt to change the rules again.

The Guardians of the Galaxy cast has called for James Gunn to be reinstated as director of the movie after he was sacked this month over old tweets.

The stars said they were shocked by his removal 10 days ago.

The Walt Disney Co fired him from the third movie in the series after tweets from 2008-11 resurfaced in which he joked about rape and paedophilia.

Left-leaning Gunn has been an outspoken critic of President Donald Trump, and the director’s old tweets were identified by conservative critics.

Many of the posts, which include jokes about the Holocaust and Aids, are too offensive to be reprinted by the BBC.

A host of fake conservatives have hastened to follow suit, including David Cole, who manages to project like an award-winning SJW in his fear of a future inability to joke about molesting children.

Kooks like Cernovich are contributing to the cycle of reciprocal accusations and firings. Leftists are not going to respond to the Gunn firing by saying, “Dang, these witch hunts have gotta stop.” Rather, everyone will respond by saying, “Shit, now I really have to watch my words.” So go ahead, cheer James Gunn’s destruction. You want Europe? That’s how you’ll get Europe. People scared to speak freely, people frightened to crack a joke. If that’s what you want, I don’t care if you’re on “my side.” Fuck off. 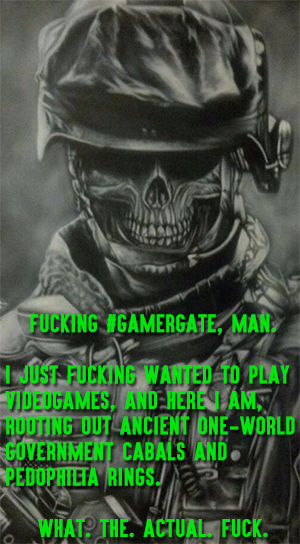 Yes, because no American is at all afraid to speak freely about women, blacks, gays, Jews, transexuals, or certain historical events that absolutely happened exactly as whatever is supposed to be the current version presently has it.  The thing these idiots never grasp is that gamers instinctively understand what it means when you’re taking enemy fire. It means you’re going in the right direction.

In fact, just last week some alt-right anti-Jewish conspiracy ninny named “Vox Day” accused me of being an accessory after the fact to the satanic Hollywood pedo ring, because according to him I know the names of those involved but choose to remain silent, because Jew. (“Vox” was butthurt over last week’s column, in which I argued that “edgy” comedians who make kiddie jokes are not necessarily pedophiles.) I looked “Vox” up, and apparently he’s a failed garage-band musician and “elves and ogres” fantasy author (amazingly, this guy couldn’t hack it in two of the least demanding professions known to man), and now he’s supposedly some kind of alt-right honcho. Big deal. Being a VIP on the Pizzagate fringe is like being the most handsome muselmann in the terminal ward. In just two years, the alt-right has gone from “Can we admit that there’s nothing wrong with being white?” to “Our prime directive is to hunt down the secret cabal of satanic ritual abusers that only we can see.”

Welcome to #GamerGate, everyone. All we wanted to do was play video games. But then we learned that monsters are real. The ride never ends.

I note that David Cole is not only defending the pro-pedos, he is also lying about what I wrote just last week. His response is amusingly akin to the inept murderer who, when accused of knowing who robbed the bank, angrily declares, “I didn’t rob that bank and I didn’t bury that body in my front garden either.”

Wait, there’s a body in your front garden?