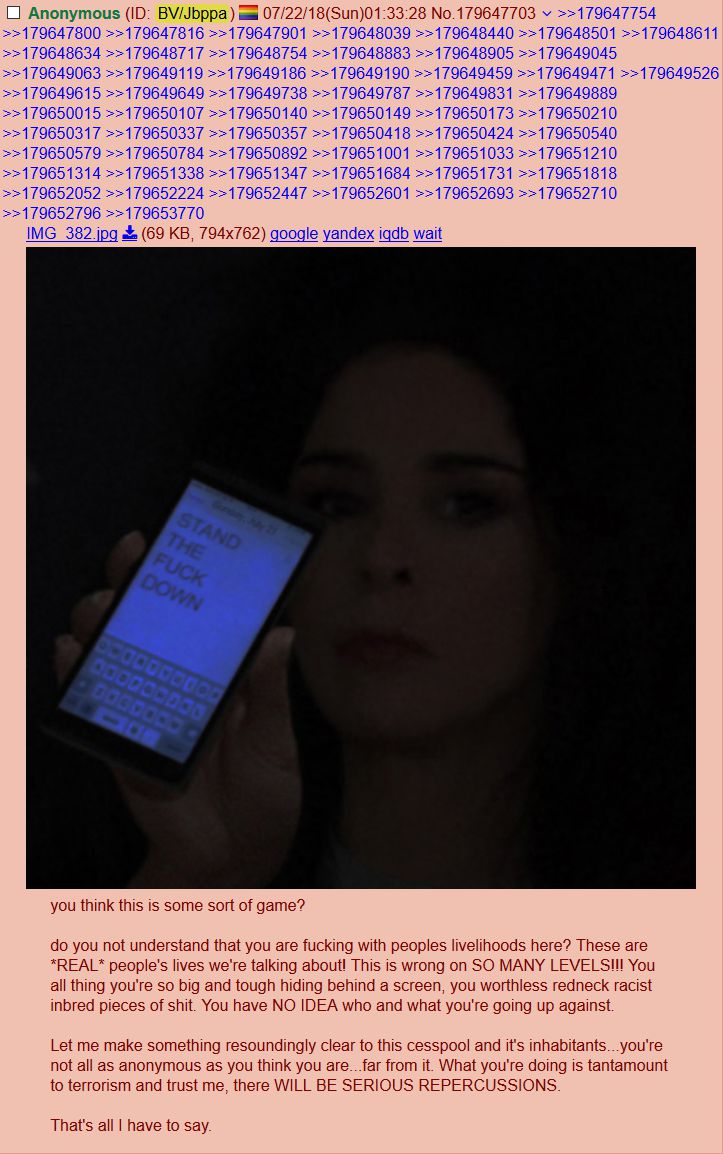 It appears the rapid takedown of James Gunn’s career has spooked Hollywood enough that they have declared war on the chans. If Sarah Silverman is to be believed, REPERCUSSIONS WILL NEVER BE THE SAME.

I was wondering why Disney would act with such uncharacteristic alacrity in getting rid of Gunn, who has not even been accused of any actual crime, when they have shamelessly hired convicted child molesters as directors in the past. A post by Neon Revolt offers a possible explanation, as it claims the entire Hollywood mafia is in a panic, due to the way in which the sacrificial Weinstein crossburn has failed to end the multiple lines of inquiry that increasingly point towards some of its highest-ranking members in film, media, finance, and politics being guilty of unspeakable crimes.

I suspect this is why Shapiro and other fake conservatives are exposing themselves now as Gunn’s defenders, because this would be one secret that they cannot afford to permit to reach either their fans or the general public. Even the most rabid evangelical Christian Zionists who fly the flag of Israel in the church sanctuary and hold sacred the broadest interpretation of Genesis 12:3 is not going to defend a network of Satanists who corrupt, rape, and murder children just because they happen to be of Jewish descent; to the contrary, his fury is only going to be stoked by the way in which he has been methodically deceived for so long.

Of course, it’s entirely possible that Shapiro, Peterson, and other inexplicable media stars are what the chans describe as “made men” themselves.

If we know anything about the weaponized autists that make up the chans, they are not going to “stand the fuck down”. To the contrary, these threats will only energize and motivate them. And if even half of what Renegade is saying is true, then it explains the cautious way that the God-Emperor has gone about breaking the power of the shadow state, because things would almost certainly get violent and out of control very fast. But sooner or later, the flood of truth is going to break through the dam of lies.

Can confirm. All of this is true and there was a thread that was investigating twitter handles. Thousands of names came up and anons were digging deeper and deeper before the (((mods))) at cuckchan shut it down. This is full on damage control and they’re really scared after that James GUNN scandal. Obviously they didn’t want another scenario like that to happen, but in trying to censor those of us exposing the sick fucks running Pedowood they didn’t realize we had archived almost everything.


Now why would Sarah Silverman be up in arms about this? Oh, that’s why.

Sarah Silverman‏@SarahKSilverman
Hey, is it considered molestation if the child makes the first move?  I’m gonna need a quick answer on this.
10:34 PM – 6 Jul 2009

I found it amusing that when I went to archive it, I got this message: This page was last archived 1 day ago. Remember, never link, always archive. The ride never ends.