General Grudge considers the calumnies and condemnations hurled against me by ComicsGate:

Vox Day has been fighting the cancel culture and deplatforming by being canceled (from institutions like Twitter to this day) and then actually trying to create new platforms for voices that have been marginalized by the mainstream media companies. Vox Day has helped build answers for Wikipedia, publishing houses and YouTube while most of you have been doing next to nothing. Vox Day has been the leading General on the front lines of the culture war and has accomplished more than just about anyone else in that struggle.

Also Vox Day was the first person to launch a successful crowd funding campaign for comic books that would compete against the big establishment companies and paved the way for everyone to follow. So what did he get for that last effort from comics-gate and from the anti-comicsgate groups that would stand on his shoulders later?

Ethan Van Sciver saw him as a threat and attacked him and his reputation full force. This act proved EVS for the first time to be, what he would soon become known to all clear minded people to be, and that is an SJW gatekeeper and self-appointed Cesar of Comics-Gate. The most ironic aspect of this move by EVS was how he clearly read and used language lifted straight from Vox Day’s “SJW’S ALWAYS LIE” to bad mouth anyone he perceived as a threat. But the way EVS did this proved that he never understood what crowd funding comics was really all about or the true nature of the culture war. This act of aggression against Vox Day was also the first act to create a division and a split in ComicsGate and create a war that goes on to this day. It started with EVS persecuting and bad mouthing Vox but continues now to any person, or group that questions ComicsGate or War Campaign. People now tend to forget that is was Vox Day who was the first target of Ethan’s ego induced rage.

Now, what about the former ComicsGate personalities and most of the Christian factions of the Anti-ComicsGate scene?

I pains me deeply when I am watching a stream featuring many of the non-comicsgate personalities I like and respect and hear them make passive aggressive remarks and jokes about Vox Day. Often it comes from the context revealing the misconception they think he is some kind of racist or fascist. The seeming fact that these people, who should know better, have bought into and drank the koolid of the MSM and talking points of some of the worst elements of comicsgate is revealing. It is revealing to their lack of judgement and their total inability to win on the front of the culture war that is crowd funded comic books.

Perhaps it wasn’t a long time ago, but it feels like it was. At this point, I could not be less concerned about what happened in the past, or who said what about me. A new era is about to dawn that will shake up comics industry to a much greater extent than all of the crowdfunded independent comics combined. This morning, I literally saw the future of comics, and it is glorious indeed.

Project Asteroid is already entering the atmosphere and plunging toward a planet full of stumbling, wheezing dinosaurs. And there will be more than enough opportunity for all of the survivors. But since we’re on the subject, here’s a peek at the pencils of an ongoing project for the Caligan backers. 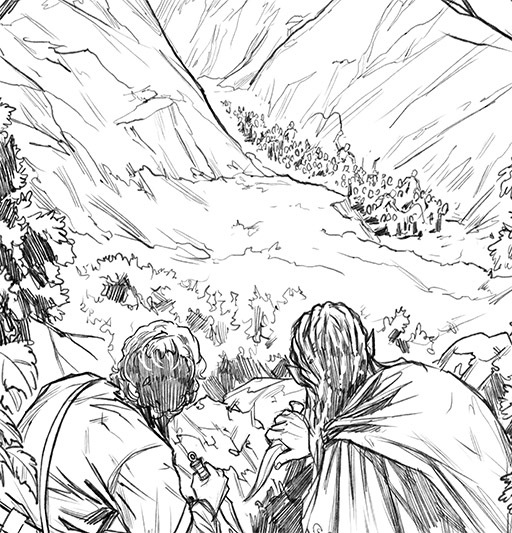