2020 was a year which felt rather like a plateau, with an awful lot of running just to stay in place, but it appears to have set the stage for some major progress on multiple fronts in 2021. A series of infrastructural advancements in everything from Arkhaven to Unauthorized that have taken place while bigger competitors like DC Comics and YouTube are in declines that appear to presage complete freefalls promise what could be a fascinating new year indeed. For once, there were no deplatformings of note; to the contrary, Google followed Amazon’s example in swiftly declining the opportunity for a showdown over one of its SJWs attacking the legitimacy of this blog.

Rather to my surprise, John Scalzi has begun posting his blog traffic numbers again, thereby permitting the return of the annual comparison of VP’s traffic to that of the Most Popular Blog in Science Fiction. 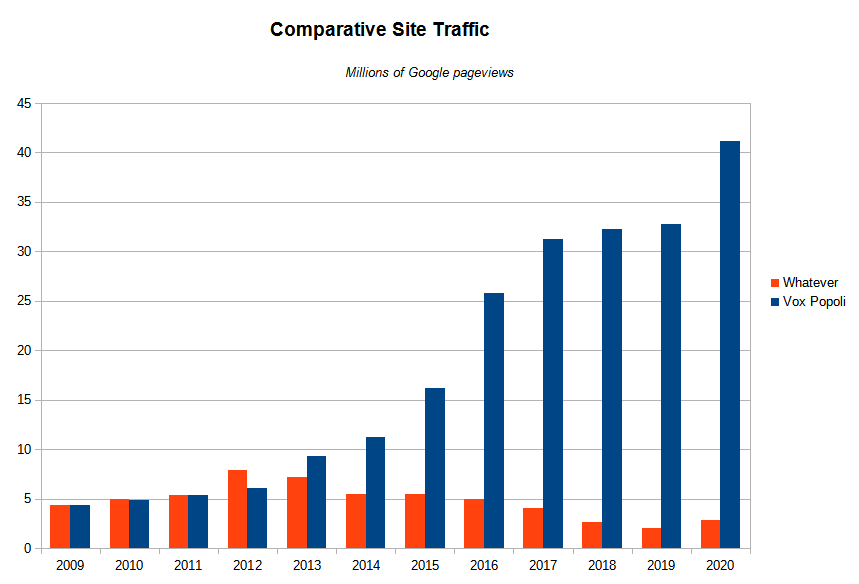 It just never gets old, does it?

For those new readers to whom this vindictive competitiveness presents a mystery, I must, in fairness, mention that Scalzi never did anything more than exaggerate his blog numbers to impress the media and his publisher. Indeed, he made rather a point of refusing to even refer to this site by name. It was a number of his fans who used to comment regularly on this blog back in 2011 and 2012 that insisted on appealing to comparative site traffic in order to stress how important Whatever was vis-a-vis Vox Popoli. One suspects he now appreciates their efforts almost as much as Jordan Peterson appreciates those of his erstwhile champions.

It wasn’t until December 2012, ironically, the year which represents the high water mark for Whatever, that I discovered VP was nearly as well-trafficked as The Most Important Blog in Science Fiction, as Whatever was generally recognized in the genre. Before any autists sperg out, they should note that the divergence between the numbers in that December 2012 post and the numbers above is because I used Sitemeter to track traffic starting back in 2003, then switched to Google pageviews retroactive to 2008 after Sitemeter became unreliable.

A Sea of Skulls remains a work-in-progress, but I’m optimistic that it will be finished in 2021, which will definitely see the publication of the entire There Will Be War and Junior Classics series. We’re also hoping to get new Wardogs, Inc. books out. Both Castalia Library and Unauthorized are going strong, and there is every reason to believe that Arkhaven is going to be an extraordinarily successful schwerpunkt in the coming year.