There will be no rapid certification of the PA election results and the attempt of the Governor and the Secretary of State to ram through the election fraud there will not be permitted. From the ruling issued by Judge Patricia McCullough:

In careful consideration of the exigencies and time constraints in this matter of statewide and national import, and the longstanding constitutional mandate that every citizen of this Commonwealth is entitled to no less than a fair and free election, it was necessary to preliminarily enjoin, on an emergency and temporary basis, Executive Respondents from undertaking any other actions with respect to the certification of the results of the presidential and vice presidential elections, if indeed anything else needs to be done, pending an evidentiary hearing to ascertain the facts of this matter and to determine if the dispute is moot. Inasmuch as the Secretary had not certified the remaining results of the 2020 general election, it was also necessary to enjoin, on an emergency and preliminary basis, any attempt to certify these results as well….

There is no harm to Respondents by the relief fashioned by this Court. The “Safe Harbor” provision of 3 U.S.C. §5 does not expire until December 8, 2020,and the Electoral College does not vote for president and vice president until December 14, 2020. Additionally, Petitioners appear to have established a likelihood to succeed on the merits because Petitioners have asserted the Constitution does not provide a mechanism for the legislature to allow for expansion of absentee voting without a constitutional amendment. Petitioners appear to have a viable claim that the mail-in ballot procedures set forth in Act 77 contravene Pa. 11 Const. Article VII Section 14 as the plain language of that constitutional provision is at odds with the mail-in provisions of Act 77. Since this presents an issue of law which has already been thoroughly briefed by the parties, this Court can state that Petitioners have a likelihood of success on the merits of its Pennsylvania Constitutional claim.

Notice, in particular, that the petitioners, who are a proxy for the Trump campaign, have been officially ruled to have “a likelihood of success on the merits” because the corrupt elected politicians, described here as “Executive Respondents” violated the Pennsylvania constitution by illegally applying the unconstitutional expansion of mail-in ballot procedures.

Translation: many, if not all, of those mail-in ballots for Biden are illegal and will not count. #bidenlost

There shouldn’t be much doubt about how the PA legislature is going to vote, now that the Republican legislators have been shown at least an amount of the true extent of the fraud:

President Donald Trump on Wednesday summoned Republican members of the Pennsylvania legislature to the White House after a GOP hearing in Gettysburg in which Trump phoned in to reassert his false claim that he “won Pennsylvania by a lot.”

But on Thursday, no one wanted to talk about the meeting.

The White House did not issue a public statement about the visit, and lawmakers who made the trip to Washington were silent. 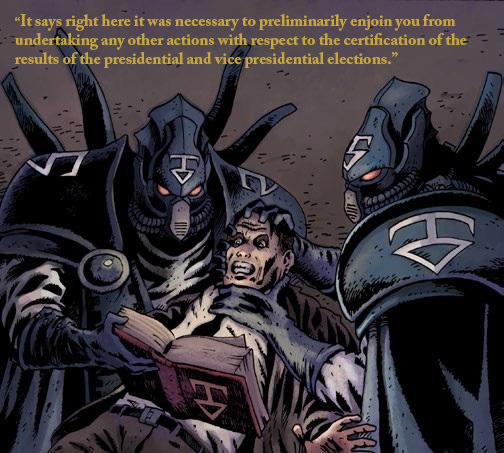