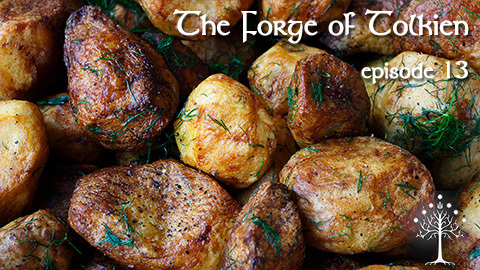 Episode 13 of The Forge of Tolkien, ICHOR AND POTATOES, is now live on #UATV.

After chanting his verses about Eärendel the Mariner in the Hall of Elrond at Rivendell, Bilbo challenged the Elves to determine which bits he had written and which were written by Aragorn. The question was a trick, as Aragorn only added a bit about a “green stone”, but it was also serious: why should the Elves be able to tell the difference in poetic style between a Hobbit and a Man?

In this episode, Professor Rachel Fulton Brown explores Tolkien’s use of poetic style as a way into the problem of writing fantasy. Drawing on Ursula K. LeGuin’s advice to aspiring fantasists, she considers the importance of speech in the act of imaginative creation and how style is critical to the composition of Christian literature. Which is better when writing fantasy: ichor or potatoes? A style reaching for the sublime, or a style willing to humble itself even unto Hobbits?