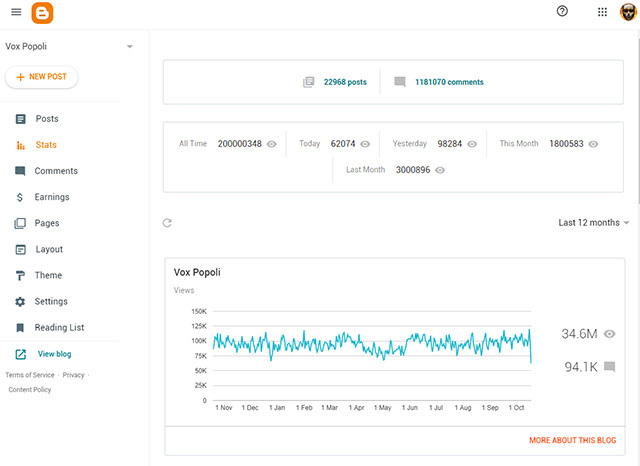 I’m pleased to report that today, 17 years and 10 days after the initial post, the Vox Popoli blog has exceeded 200,000,000 pageviews. The blog now consists of 22,968 posts and 1,181,070 comments, although the number of comments does not include those left during the years when the two previous comment systems were utilized. In the interest of clarity, note that these numbers do not include the 26 million views at Alpha Game or the 150k views at DevGame.

A few observations about this traffic milestone. First, it underlines the importance of consistency. If you’re not going to post at least 3-4 times per day, you’re much better off contributing regularly to a group site. Very, very few one-man blogs have survived the demise of what used to be known as the Blogosphere. Second, with an average of 169 views per comment, it proves that the commentariat is not even close to synonymous with the overall readership. Third, it demonstrates that the media narratives about who and what are “popular”, and who and what are not, are largely false.

Fourth, and most importantly, it emphasizes what I’ve said about the ticket. If you refuse to take the ticket when it is offered, not only will no amount of success or talent open any important doors for you, but the media will remain resolutely silent about anything and everything you achieve unless it provides them with an excuse to try to take you down.

I would, of course, be remiss if I did not express my deep personal appreciation to all the investigative reporters, intelligence agencies, science fiction social justice warriors, and self-appointed thought police for their assistance in making this possible. It literally could not have been done without you.