I want to preemptively say that wokescolds like me are not coming for your favorite media or going to police your enjoyment. Banning anything is not on the table. I seek to educate and critique. To paraphrase Anita Sarkeesian, we can enjoy media while being critical of its problematic aspects. Orcs are here to stay. Nobody is going to take away your Forgotten Realms and Dragonlance novels.

But understand that colonialism and its tropes are the original sin of the modern age. You can’t divorce anything from it. Time marches on and so has fantasy literature. Fantasy literature and its derived role playing games have, like everything, been touched by colonialist narratives. It is important to recognize that. I love fantasy. I even love elves and orcs but to think that race science bullshit isn’t part of its DNA is ignorance.

The way Orcs are depicted in fantasy literature mirrors the racist tropes and narratives about indigenous and black people that was used to justify colonialism and slavery. At various times there were ideas like the Curse of Ham, to Mormon views that black people and native americans were once white but cursed by God, to later eugenic and race science views. All of this was in the zeitgeist when Orcs were imagined by the pioneers of the genre like Tolkien. Elves too are evocative of race science mythology about a lost hyperborean master race that Aryans are descended from.

Excuses about how Orcs are corrupted elves then, fall flat, because that to is also a trope of racist mythology. Ultimately Orcs aren’t real. They are made up. But they were not made up in a vacuum. When they were made up, they mirrored the white man’s burden narrative. And the passage above is alarmingly similar to things written about human beings in those times.

I would say Eberron, Warcraft 3, and Elder Scrolls all made strides in reimagining Orcs Elder Scrolls also does a good job not making orcs canon fodder villains that are fair game for anyone to kill. I feel that Eberron got this right. The designer didn’t make fantasy counterpart cultures and reimagined the monstrous races. None of them, except for literal demons, are presented as inherently evil and Orcs have a druidic order that protects the world from the plane of madness. But even that is going to be fruit of a poisoned tree to some degree but so is everything.

None of this is to say you can’t enjoy DnD or even include Orcs in your game or cosplay as Orcs, but understand that there is a history there and that history might make people uncomfortable.

Translation: #Orcgate has begun. There is literally nothing they will not seek to take away from you.

I have a simple, one-word response: WAAAGH! 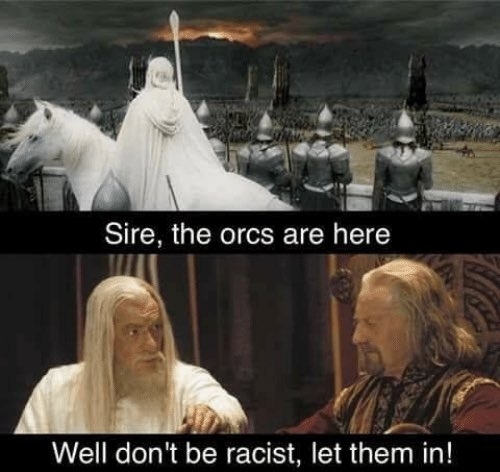