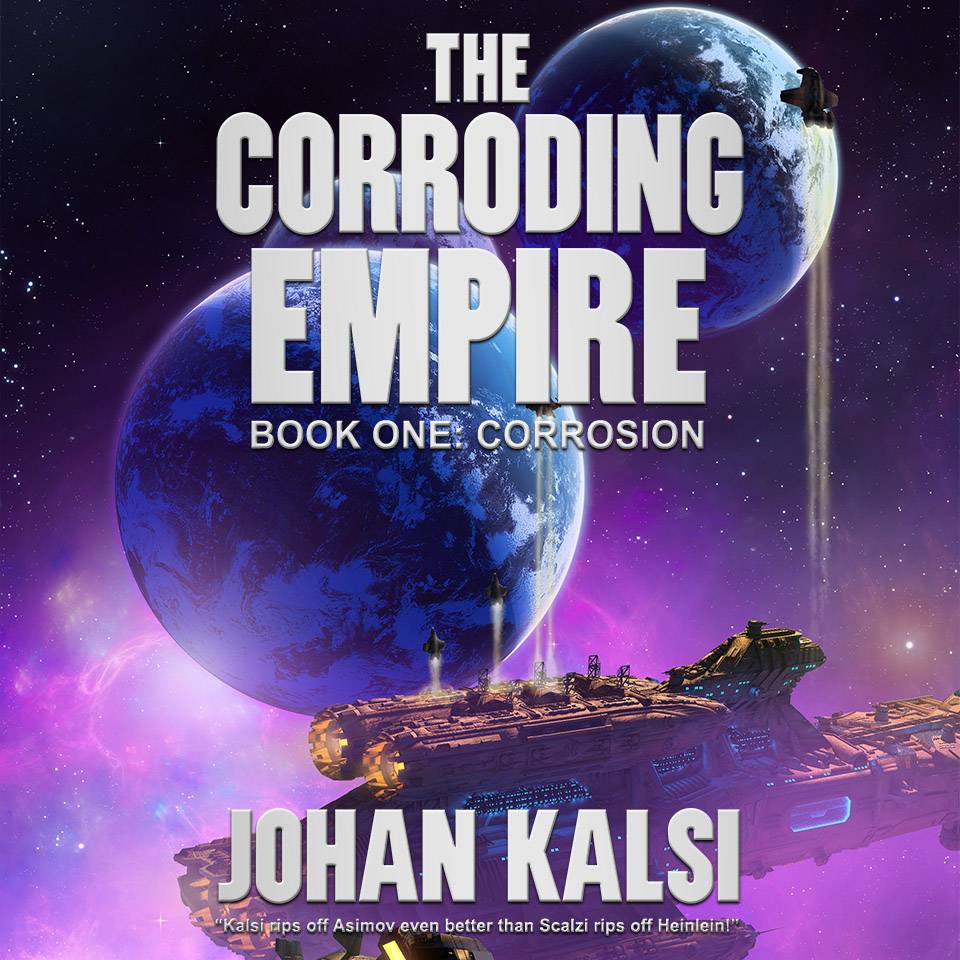 Corrosion (The Corroding Empire, Book One)

Written by Johan Kalsi and narrated by: Jon Mollison. 7 hours 3 minutes. DRM-free ebook included in both Kindle and Epub formats.

Galactic society is ruled by algorithms. From interstellar travel and planetary terraforming to artificial intelligence and agriculture, every human endeavor has become completely dependent upon the hypercomplex equations that optimize the activities making life possible across hundreds of inhabited worlds. Throughout the galaxy, Man has become dependent upon the reliable operation of 10 million different automated systems.

And when things begin to go wrong and mysterious accidents begin to happen no one has any idea what is happening, except for a sentient medical drone and the First Technocrat of Continox. But their ability to even begin to try fixing the unthinkably complicated problem of galaxy-wide algorithmic decay is made considerably more difficult by the fact the former is an outlaw and the latter is facing a death sentence.

Johan Kalsi is Finland’s hottest science fiction author. An accomplished geneticist as well as a 6’3″ ex-Finnish Marine, in Corrosion, Kalsi shows himself to be more Asimovian than Asimov himself. Corrosion marks his English-language debut.


Jaggis was unsurprised when he was permitted to take his customary seat in the center of his colleagues, as it may as well have been the witness stand. All eyes were on him. There was an audience in attendance; the room was packed, almost entirely with media.


He wondered if he would be thrown to the mercy of the Human League immediately or if the process would be drawn out. A part of him wished they would simply get the business over with quickly, and without requiring him to participate in the charade.

As he expected, the Third and Fifth Technocrats were running the show. Although Rikker-Smythe was nominally presiding—he wore the sparkling digital sash that had hitherto been Jaggis’s prerogative as First Technocrat—one could see by the way he looked to Harraf and St. Asko for approval that appealing to his common sense would be fruitless. Did the Human League have something on the Second Technocrat? Or was it simply his natural weakness of character permitting the two predatory politicians to dominate him?

He shrugged. It didn’t matter now. What he needed to know was if Harraf was merely attempting to unseat him or if he had more nefarious intentions. He found it difficult to believe that either man was a genuine Humanist, but the fact that he’d been arrested on the same day as the assassination attempt smacked of St. Asko’s meticulous, belt-and-suspenders approach to life.

“As the initial order of business, it falls to me, as Second Technocrat, to ask the First Technocrat to recuse himself from this discussion,” Rikker-Smythe said. He sounded authoritative, he looked authoritative, with his thick white hair and patrician features, but Jaggis knew the noble appearance was misleading. The Second Technocrat was a junior officer in an admiral’s body, and had made a career of successfully shying away from all responsibility. “It would not be appropriate for him to participate in this discussion, as he is to be its subject.”

“If he’s the subject, he’s going to have to participate, Mikke!” The Eighth Technocrat, a fleshy New Tejan, cracked, but subsided when Harraf glared at him.

“Well, I mean to say, he cannot participate as a participant-”

“Oh, for Space’s sake!” Harraf broke in. “I move that Caden Jaggis be temporarily stripped of his seat on the Council while the matter of his alleged criminal negligence concerning the growing incidence of algorithmic decay throughout Continox.”

“I will recuse myself from the Council today in order to permit the consideration of my actions, so long as they are limited to this specific accusation of criminal negligence under Statue 245.856, subsection 28b.”

Rikker-Smythe looked at Harraf, who looked thoughtful before glancing quickly at St. Asko, who gave no sign of acceptance or approval. Harraf nodded, and Rikker-Smythe cleared his throat. “The First Technocrat has graciously offered to recuse himself from our deliberations, therefore I shall preside until such time as he resumes his duties or a new First Technocrat is named.”

The latter looked to be a much more likely proposition, Jaggis thought. But would it be Harraf or St. Asko who would replace him? Was it the taciturn Fifth Technocrat who was the real force behind this, and not his openly ambitious colleague?

“I will now open the floor to questions, in order of precedence. Tech Harraf, you may proceed.”

“Thank you, Tech Rikker-Smythe.” Harraf nodded to the Second Technocrat and flashed him an obsequious smile. “And I should like to, if I may, commend the way you have handled this unfortunate situation with the utmost fairness to all the parties involved.”

Jaggis sighed and tried not to roll his eyes as Rikker-Smythe beamed and murmured some self-deprecatory nonsense. He really should have done a better job of promoting stronger allies on the Council; all the Second Technocrat really wanted was to be petted by his colleagues and admired by the public. Harraf’s shameless flattery was rendering the man as pliable as molten plastic.

“Now,” said Harraf staring down his long, elegant nose at Jag. “How long have you been aware of the potential problem of algorithmic decay?”

“In theory or in practice?”

“Twenty-five years.” Jaggis knew they were expecting a denial, or at least an evasion, and smiled at their murmurs. He wouldn’t give them the satisfaction of going through the pointless drama of pinning him down. “We’ve all known it was at least a potential problem since the Curbotron Incident. No one really took the theory seriously at the time, but it’s a matter of public record. I expect even you might have come across the concept at a cocktail party on occasion, Mellam.”

The Third Technocrat flashed his white teeth again, but there was death in his eyes. Like most politicians, he bitterly resented any suggestion that he owed his place more to his networking skills than his technical expertise. But he kept his cool.

“About three months ago.”

“And would you say algorithmic decay is a trivial problem, a significant problem, or a major problem?”

“I would say it is somewhere between a planetary catastrophe and an existential threat to the species.”

His statement was met by was considerably more murmuring and shifting of seats on the part of the councilors. But the audience was even more affected, as there were gasps and inadvertent outcries on the part of those watching who had been hitherto unaware of the situation.

“What measures have you taken to in an attempt to address the problem?”

“Tech Jaggis, you will address the Member of the Council as Technocrat or Tech Harraf.”

“Very well, let me rephrase that. What have you done, Technocrat?”

Harraf gestured and rows of figures began to spill across the huge screen behind him. “I took the initiative to establish a full research investigation of the problem, an investigation that you initially deemed unnecessary, ignored, and eventually, stifled.”

“I did nothing of the kind!” Jaggis couldn’t help raising his voice.

Harraf smiled coldly and gestured again. Jaggis heard his own voice, declaring in his own words, that algodecay was not real, that there was no need to do any research into it, and that the very idea it was real was likely the product of a diseased mind. It was a recording of one of his early conversations with Servo, and Jaggis winced as he heard the arrogance and disdain that fairly dripped from his voice.

“The Council has obtained a quantity of your written communications in which you repeatedly state similar opinions, despite the best efforts of various parties to bring the issue to your attention, Mr. Jaggis. Is it necessary for us to read them out loud or do you admit to obstructing efforts to research the causes and consequences of algorithimic decay?”

“Are the allegations true or not, Mr. Jaggis!” Harraf was insistent.

“They are true,” Jaggis said reluctantly, knowing he had no choice but to admit as much. And they were true, he had to admit. But his words were being taken out of context! Surely the other Technocrats had to understand that.