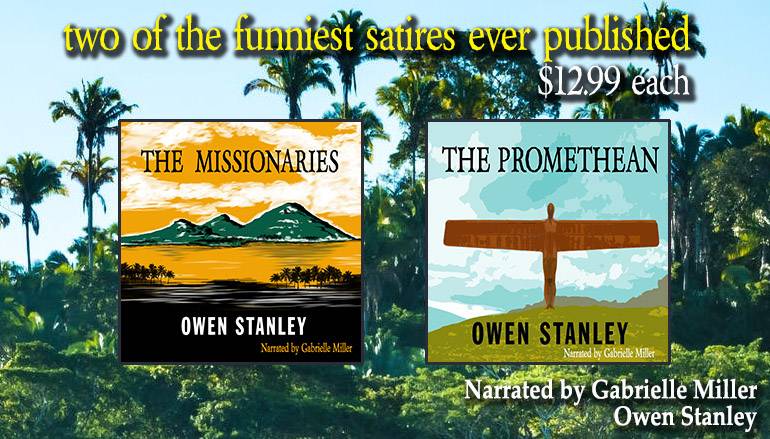 Both The Missionaries and The Promethean are now available in audiobook+ at the Arkhaven store. You might suspect that I am exaggerating when I say that they are two of the funniest satirical novels ever published. And you would be absolutely and utterly wrong. Narrator Gabrielle Miller also does a wonderful job of conveying the literary humor in her unique Australian accent.

They went off in Fortescue’s Range Rover to The Drunken Badger, an old pub nearby with a mouldy green thatched roof that was the local meeting spot and had been kept for years by the genial Ken with fat Shirley his wife. Fortescue offered to stand Harry a pint of beer, but when Harry surveyed the range of drinks available, his heart sank. There was no prosecco, no white wine, indeed, no wine of any kind, as the pub had for generations stocked only local ales, the favourite of which was Old Stinker. However different palates were known to prefer Smoking Dog, Swine Snout, Wife Beater, or even Holy Terror, the most alcoholic.

This was made from a traditional recipe inherited from the local monks before Henry VIII destroyed their abbey nearby, and was notable for producing some very unmonkish behaviour. The label of Swine Snout depicted a farmyard dominated by a large manure pile, in which assorted pigs were busily rooting, and Smoking Dog was advertised by a hairy monster with very large teeth smoking a pipe. Wife Beater is perhaps best left undescribed. As he surveyed these relics of the Dark Ages, Harry groaned inwardly. Was an ice-cold Budweiser really too much for a civilised man to expect in a presumably industrialised nation?

Shirley informed Ken that the American gentleman was asking about Budweiser. Ken scratched his head and said he thought he had seen a can somewhere only recently.

“I know you was rummaging around in your shed looking for rat poison the other day,” said Shirley. “Could it have been there?”

Ken went off to look and came back with a filthy old can that had been put up on a shelf with the weedkiller and lawn fertiliser in the garden shed long ago. Ken washed it off under the tap in the bar.

“Not in a very good state, I’m afraid. Must’ve been there for years, ever since Don used to run this place. We had some Americans stationed at the airfield back then. But you’re welcome to it. Glad it’s found an ’ome at last,” pouring it into a glass. “We won’t charge you for that. On the ’ouse.”

Harry pretended to be grateful for the warm and rather odd-tasting relic of the Budweiser brewery and thought that Swine Snout might have been preferable. A local inhabitant, dressed in what looked like greased sacking, had just brought his old, wet, and shaggy dog in with him, which was now sitting under the table. Harry noticed the brown stains on the grubby carpet and wondered if they had any connection with the rather unpleasant odour that seemed to be coming from the direction of the dog.

Charles asked Harry what he would like for lunch, and Ken passed them the menu, a sheet of greasy plastic covering a crudely typed list of local delicacies. At the top of the list were pigs’ trotters and then tripe and onions, blackbird pie, jellied eels, boiled calf’s head, deep-fried pigs’ ears, brains in white sauce, ox tail fritters, and bull’s testicle soup as the pièce-de-résistance. Everything, apparently, came with chips and gravy, except the bull’s testicle soup which had mushy peas as a side order.

Despair seized him, and for a moment he actually found himself wishing for a McDonald’s. But then, like an island of sanity in a sea of madness, Harry suddenly noticed pork pie at the bottom of the menu and said he would really like some of that.

Good God, was there no end to these rural horrors, thought Harry.