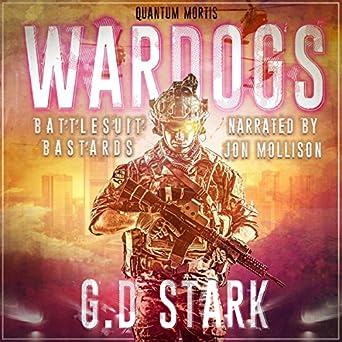 All war is murder for profit. Some people are just more open about it.

Wardogs Incorporated is one of the largest and most professional mercenary corporations operating in the Kantillon subsector. If you need a bodyguard, an assassination team, or an armored cavalry regiment complete with air support, Wardogs Inc. can provide it for you…for a very steep price.

Tommy Falkland is proud to be a Wardog. And he’s delighted when WDI’s executives sign a massive contract to arrange for a little regime change on a no-account low-tech planet that looks like a highly profitable cakewalk. But when the transportation company unexpectedly fails to deliver their armor and artillery dirtside, Tommy and his fellow Wardogs find themselves caught in the middle of the killing zone.

There, they learn that bullets will kill a man dead just as quickly as a plasma bolt.

Battlesuit Bastards is the first in the Wardogs Inc. series of military science-fiction novels.

We submitted this exclusively to Audible before creating the Arkhaven store, so you’ll have to acquire it there. However, all new audiobooks recorded will be available from both retail channels. Quantum Mortis fans should keep in mind that Wardogs Inc. is set in the QM universe.