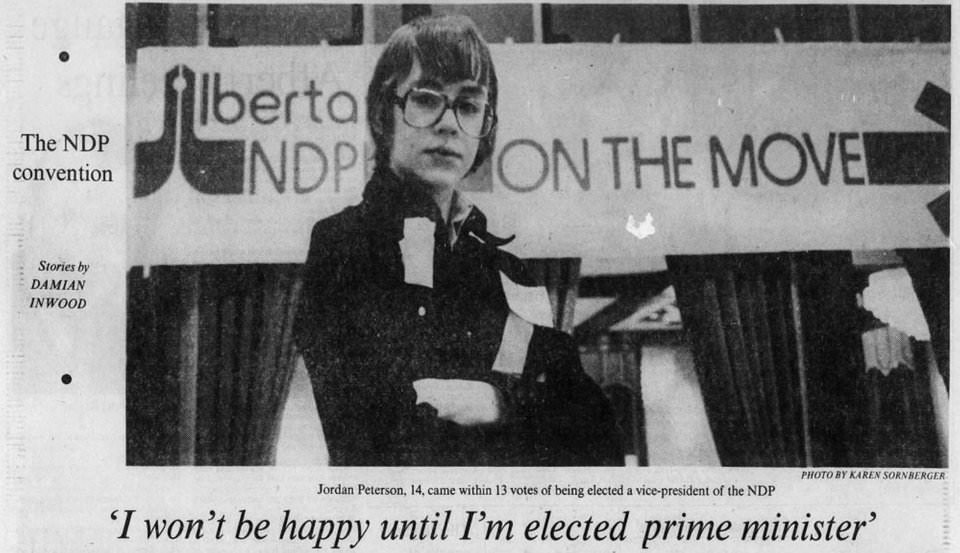 Now we know why Jordan Peterson is such a shameless con man. He’s a politician at heart. And as for those socialist credentials, notice that he’s at the NDP convention. From Infogalactic:

New Democratic Party
The NDP evolved in 1961 from a merger of the Canadian Labour Congress (CLC) and the Co-operative Commonwealth Federation (CCF). The CCF grew from populist, agrarian and socialist roots into a modern socialist party. Although the CCF was part of the Christian left and the Social Gospel movement,[9] the NDP is secular and pluralistic. It has broadened to include concerns of the New Left, and advocates issues such as gay rights, international peace, and environmental stewardship.

Meanwhile, St. Jordan the Sleepless demonstrates that there is no principle he advocates that he will not hesitate to turn around and violate in order to signal his politically correct virtue.

Jordan B Peterson@jordanbpeterson
All you using (((three brackets))) online to oh-so-cleverly disguise your pathetically fashionable antisemitism might reflect today on what responsibility you bear for this:

None at all, Jordan. Whatever happened to your insistence on individual responsibility? By your own deeply thoughtful and very carefully chosen teachings, how can anyone who did not pull the trigger at Squirrel Hill, or even know what a Squirrel Hill is, possibly be responsible in any way, shape, or form for the attack there?

And if you’re looking to assign some sort of grand strategic responsibility to someone beyond the killer himself, the ultimate blame for all the coming inter-ethnic slaughter around the world is with globalists like you, who have stupidly insisted on violating the age-old principles of a) Fences Make Good Neighbors and b) Diversity + Proximity = War in the name of your insane one-world neo-liberal ideology.

The best part of this latest own goal on St. Jordan’s part is that several people have posted the cover of Jordanetics: A Journey Into the Mind of Humanity’s Greatest Thinker in Peterson’s own Twitter feed.

UPDATE: Roosh is on the case.

Roosh@rooshv
Did (((CAA))) make you write that?

Roosh@rooshv
Jordan Peterson is finished with red pill men. He has decided that a blue pill audience is more lucrative than following his own Rule 8: “Tell the truth, or at least don’t lie.” He KNOWS he’s not being honest when he says that men who use a meme bear “responsibility” for murder.

Roosh@rooshv
Note that Peterson is using the same “words matter” talking point that we have seen from George Soros and CNN head Jeff Zucker after the fake bombs were mailed out. He has dutifully executed his marching soldiers as an obedient soldier of their army.

Jordan Peterson echoing the talking points of (((George Soros))). Not the first time we’ve seen that.

UPDATE: Any doubt that he’s a gamma?