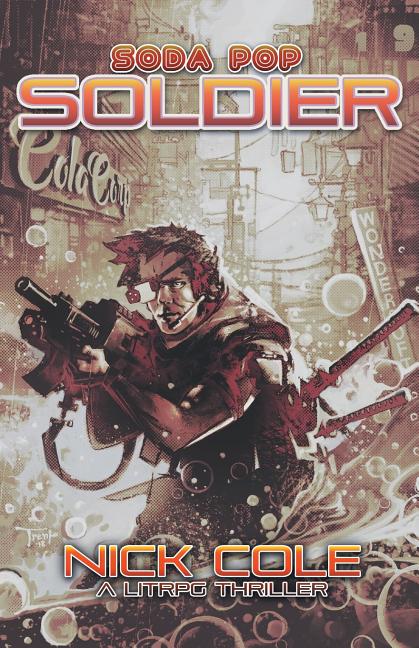 SODA POP SOLDIER by Nick Cole is available in paperback from Castalia Direct for $19.99. It is also available via Kindle and Kindle Unlimited on Amazon.

The war starts at 6 A.M., in-game time. By 6:45 we’re losing Hamburger Hamlet as our entire line begins to disintegrate.

It isn’t a total collapse. Pockets of resistance hold out in key positions, buying ColaCorp time, expensive time, to fall back and reorganize. On my right flank, Kiwi holds a high hill overlooking the Song Hua river basin. We call that hill WonderSoft Garage because of the small power station and vehicle spawn depot located there. WonderSoft had made the capture of that hill and power station a primary objective in the last three battles we’d fought at this end of the basin.

And it looked like they were gonna try for it again today.

Over BattleChat, Kiwi swears as he burns through the ammo that an air resupply Albatross barely managed to get through. In my mind, I can see empty lager cans parading around the workspace that is Kiwi’s keyboard and monitor, as ambient in-game sound resounds in a metallic symphony of ammo brass expended in adult-sized doses. If the sound of auto rifles and explosions is a kind of music, and to some of us it is, then Kiwi is Beethoven.

Through graphically rendered feathery willow trees and the game-supposed heat waves of the day, I can barely make out what’s going on up at the top of the hill in brief glimpses. Three fast-attack WonderSoft Goats, their version of a jeep, and a Thrasher light mech are burning. Thick oily smoke belches from the mech, and a moment later it explodes in a shower of sparks. More WonderSoft Goats and Thrashers climb the road to the bridge that leads to our side of the river.

WonderSoft infantry scramble from cover, racing to other cover, as Kiwi fights hard to keep them from crossing the choke point at the bridge and capturing WonderSoft Garage. It’s about to get real intimate, real quick.

“Command, we’re gettin’ killed up here,” shouts Kiwi over BattleChat. His transmission is broken and distorted by automatic weapons fire in the background. “I’m down to three grunts,” he continues. “Request reinforcements or evac, A-S-A-P! If you’ve got fire support, I’ll take it now, but you’d better drop it right on top of my position, your choice, Command.”

Minutes earlier I’d requested Command point two transports of grunts our way as reinforcements. One of our dropships got jumped by a flight of WonderSoft Vampires as they’d approached the LZ. The other, piloted by RiotGuurl, had gotten away.

RiotGuurl is as good a pilot as I’ve ever worked with. Losing the first transport hadn’t been an easy choice for her, but when a WonderSoft Vampire caught your electronic scent, there weren’t many options left for a transport squadron other than to split up and run like hell to get away from that wicked ground attack jet.

Since then RiotGuurl was maintaining radio silence. I know she’s chasing every nook and cranny in the jungle-clad hills that surround the basin on all sides, flying her gunship way too close to the computer’s representation of the ground, looking for a route back into Hamburger Hamlet so we can resupply and reinforce the river crossing. Maybe even help Kiwi.

“Be advised, Command, it’s just me now. All my grunts are KIA.” Kiwi again. “Two ammo packs left and multiple Softs inside the wire.” Kiwi never gives up. Even when he’s being overrun. Maybe it’s an Australian thing. Once this war is over, I plan on taking some of my winnings and heading down under to spend some time in Gigaboo Flats at the Wonky Boomerang, Kiwi’s favorite post-battle watering hole. But hopefully the Cola Wars will never end, or else how will I get paid?

“Kiwi, evac not possible at this time. Sorry about that, son.” It’s RangerSix, ColaCorp’s tactical commander. The fact that he’s overseeing our little firefight reinforces how crucial this battle really is for ColaCorp.

Using my targeting monocular, I scan the sloping hills and tall grass behind and above Hamburger Hamlet for our commander’s avatar. RangerSix is the kind of guy who can change a battle with a basic rifle kit and some explosives. As usual I can’t find his hiding place.

Across the river, WonderSoft artillery begins throwing everything they’ve got at us. Head down inside my command post, I crank my speakers to full ambient in-game sound, cutting off Catherine Wheel’s seminal late-twentieth-century album Ferment. I’m waiting to hear RiotGuurl’s turbines. She’s Kiwi’s only hope now.

“Negative at this time.” I hear the quiet frustration in RangerSix’s smoke-stained voice.

Behind me, in the detailed squat bamboo and stone village that is the game designers’ representation of a fictional Southeast Asian river basin village, a place we call Hamburger Hamlet as a nod to the often bloody struggles for online supremacy that take place there, our armor rolls through, retreating farther to the east. We’ve been holding this side of the river, waiting for our massive Charger IV battle tanks to cross the muddy brown shallows under heavy mortar fire. Now, it’s time to bug out.

WonderSoft Garage has always been the key to control of the river crossing at Hamburger Hamlet. There’s no bridge, but the river’s shallow enough to get most vehicles across. Now that the overwatch Kiwi was providing at the garage is on the verge of being taken, the battle, at least here alongside the river, is lost for ColaCorp. Any of our units on the far side of the river aren’t getting back to our lines without an airlift. The game day still promises more fighting. It’s Saturday, and the network goes big on coverage for the weekend. But to lose good armor this early would spell disaster for whatever Command has in mind for us to do next. We’ve gotten the Chargers back to this side of the river. That’s enough for now. We’ll have to fight another battle somewhere else.

“Afraid so, son,” says RangerSix to Kiwi over BattleChat regarding any kind of assistance. Or to be more specific, the complete lack thereof. “Sorry.”