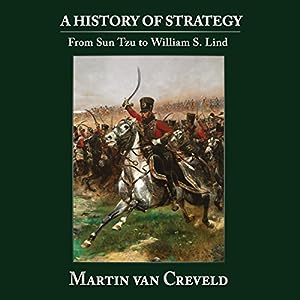 There are few better suited to write the history of strategy and
military thought than Dr. Martin van Creveld, who has been a significant
contributor to the literature of war. A professor emeritus at the
Hebrew University, Jerusalem, Dr. van Creveld is one of the world’s
leading writers on military history and strategy, with a special
interest in the future of war. He is fluent in Hebrew, German, Dutch,
and English and has authored more than 20 books, including the
influential Technology and War: 2000 BC to the Present (1988), The Transformation of War (1991), and The Culture of War
(2010). He is known for his development of the concept of
“nontrinitarian” warfare as well as contributing two books to the 4GW
canon.


Featuring a foreword by Dr. Jerrry Pournelle, A History of Strategy: From Sun Tzu to William S. Lind
begins with the Chinese military literature, then reviews the Greek,
Roman, and Byzantine works before proceeding to the Middle Ages. From
Machiavelli and Montecuccoli to Guibert and Frederick the Great, van
Creveld chronicles the gradual transition from medieval to Napoleonic
warfare and onward into the nuclear age and the rise of ISIS.

We’re very pleased to announce our second audio book, A History of Strategy: From Sun Tzu to William S. Lind, and to be able to let you know that many more are on the way, including Awake in the Night Land, SJWs Always Lie, and There Will Be War Vol. X. And if you haven’t heard it yet, you’ll likely want to check out the audio sample of Cuckservative: How “Conservatives” Betrayed America as well.

Our goal is to have all Castalia House books available in audio by the end of 2016. I know most of the readers of this text-heavy blog prefer ebooks to audio, but if you’ve got friends who prefer the latter, do us a favor and let them know about our audiobook line.