Jim Butcher, Larry Correia, and John Scalzi all have something to say about Worldcon’s decision to ban Jon Del Arroz from attending.

Don’t agree with Larry about everything, but when it comes to WorldCon and the Hugos, I think he’s got a point or two which are, based upon my experiences with WorldCon, difficult to refute.

The choices made by various folks involved with WorldCon have, over time, convinced me that there’s quite a few more less-than-nice people there than at other conventions. As I get older, my remaining time gets increasingly valuable. If I went to WorldCon, that’s a weekend I could have spent with some of the many wonderful people in my life, or with excellent and nerdy readers who don’t much care about politics and just want to do fun nerd things. Or I could have spent that time writing.

There’s probably a lot of perfectly wonderful people helping with WorldCon, and there’s certainly a lot of nice people attending. But it’s sort of hard to see them through the crowd of ugly-spirited jerks, and the nice people of WorldCon? They are completely inaudible over the noise the jerks are making.

So for the kind people at WorldCon, I hope you catch me at another con or signing sometime, and thank you so much to those of you who buy my work.

To the jerks, may you meet no one who displeases you, and I hope that your con goes exactly the way you want it to go.

Wait… so how did WorldCon embarrass themselves now? They banned a dude because he’s got the wrong politics and he’s loud and annoying about it? Heh. These assholes have allowed stalkers, creepers, weirdos, sexual harassers, and pedophiles to attend, but at least those folks had the right politics and thus were not guilty of any dangerous wrongthink.

And now they are saying that they booted him because he said he said he was going to wear a body cam to protect himself from false allegations.

I can’t imagine why a conservative author would want to cover his ass at a con in enemy territory… oh wait.

A few years ago NK Jemison tweeted about how she heard that Larry Correia was horribly rude and racist to a poor Author of Color on a panel at GenCon! GASP. So immediately ten thousand social justice nitwits retweeted about my horrible racism.

Until I responded with Oh really? Which panel? Because every panel I was on at GenCon was recorded. Let’s go to the tape.

And that shut that nonsense right down.

If you are an author with the wrong politics, and you are at a con surrounded by social justice warriors who love to make up accusations, you would be a fool not to keep witnesses around.

Is Jon annoying? Eh, I’ve talked to him about his tactics for activism. We’ve got some disagreements. Different strokes for different folks.

But banning a guy for being annoying? Have you ever been to a scifi convention? ?

But they can’t come out and say he has the wrong politics and his activism bothers them, so instead, as usual they make up some crap about feeling “unsafe” and “harassment”. Which is funny, because with SJWs harassment is a one way street. And they can harass the shit out of anyone who disagrees with them. And if you don’t like it here is your official WorldCon wooden anus.

Personally, I wrote off WorldCon after they demonstrated they are an insular circle jerk. I proved my point about them a few years ago. None of this is surprising now.


And John Scalzi is at his projecting, posturing best. I’m sure we’re all surprised.

John Scalzi@scalzi
His self-winding persecution complex doesn’t require me or anyone else, and I don’t give a shit what that sad little boy (or his equally sad party pals) does or thinks about anything.

Sure you don’t, Blobby. Now go eat another box of donuts while your career – and, thanks in part to you, your publisher – continues to spiral into the ground.

Jon Del Arroz won’t be going to the Worldcon science fiction convention, even though he is the leading Hispanic voice in science fiction and he bought a ticket. The multi-award nominated military science fiction author was banned publicly from the upcoming festivities in San Jose, California, without ceremony or explanation by Worldcon’s Incident Response Team. “At this time we are converting your membership to Worldcon76 to a supporting membership as you will not be permitted to attend the convention. On your personal blog you have made it clear that you are both expecting and planning on engendering a hostile environment which we do not allow. If you are found on the premises of the convention center or any of the official convention hotels you will be removed,” the organizers wrote….

“With Worldcon’s statements about ‘intent’ to violate their rules, and failure to specify rules, this is a clear targeting over my politics because I’m a vocal Christian and Hispanic Trump supporter,” says Del Arroz. “The left claims I should be banned for controversial political opinions, but the only opinion I espouse on a regular basis is that artists should not be blackballed for their politics. That shouldn’t be a controversial topic. It is imperative that artists be free from fear of retaliation of their industry in order that they might create great works of art. This is the ultimate free speech issue.”

Del Arroz is contracted as a writer for Castalia House’s spectacular answer to SJW Marvel, Alt*Hero, which will issue a major challenge to social justice messaging in comics. PJ Media reached out to Castalia’s lead editor, Vox Day, for his take on the blacklisting. “The decision of the SJWs at the 2018 Worldcon to ban a well-known Hispanic conservative from attending the event is not surprising,” said Day. “It is, however, not a little ironic, as they have historically had no problem permitting child molesters and convicted sex criminals to attend Worldcons over the years, including Walter Breen, Arthur C. Clarke, David Asimov, Marion Zimmer Bradley, and Edward E. Kramer.

The Walter Breen incident with Worldcon was especially horrifying as told by his daughter Moira Greyland Peat in her latest tell-all, The Last Closet, which describes her life growing up in a pagan LGBTQWTF family and spills the darkest secrets of a science fiction community that turned a blind eye to child sex abuse.

Considering the known and suspected sex criminals who are still permitted to openly attend Worldcon, it’s almost astonishing that the organizers would dare to call attention to their attendance policies in this regard. Almost, but not quite. What I find more astonishing is the idea that Jon Del Arroz, or any sane, functional human being, wants to spend any time at all in the depraved Star Wars cantina of science fiction fandom. 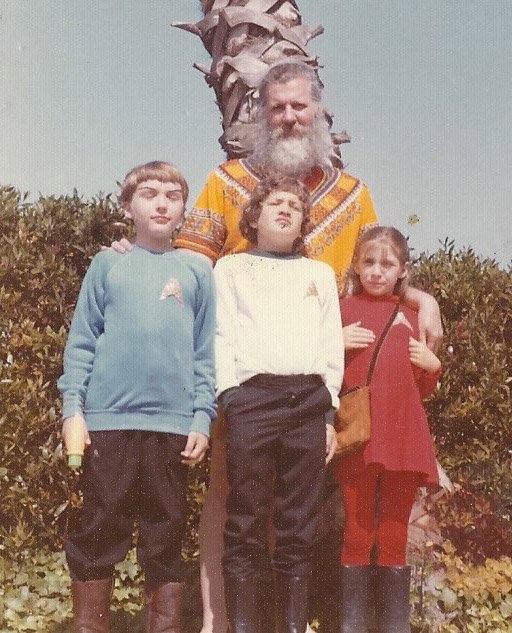 I’ve spoken with Moira and she has endorsed the idea of creating the Marion Zimmer Bradley Awards for Normalizing Sexual Abnormality in Science Fiction and Fantasy. We have a whole host of ideas for various categories, including:

Anyone got any more category ideas? I’m thinking four nominees per category. This is going to be a world-famous award, and we don’t want too many nominees out there bragging about their Bradleys.

Of course, we’ll have to sort out precisely who is permitted to nominate and vote on the awards, and if there is going to be registration or other sort of limitation on participation, such as presenting evidence of having purchased a Castalia House book.

Regardless, no SJWs or pedos will be allowed.

UPDATE: Moira suggests “Never Turn your Back on a Breen” be engraved on the award.

Or sex criminals. But they do ban Hispanics. The leading Hispanic science fiction writer – and author of the first Alt★Hero novel – Jon Del Arroz, is banned from attending Worldcon.

Mike Glyer of File 770 saw it coming back on December 22nd. But what did Mike know and how did he know it?

MG: Serious question. Do you have a Worldcon membership?

JDA: Yup, I’ll be there. I don’t believe in taking my ball and going home.

Worldcon 76 has chosen to reduce Jonathan Del Arroz’s membership status from attending to supporting. He will not be allowed to attend the convention in person. Mr. Del Arroz’s supporting membership preserves his rights to participate in the Hugo Awards nomination and voting process. He was informed earlier today of our decision via email.

We have taken this step because he has made it clear that he fully intends to break our code of conduct. We take that seriously. Worldcon 76 strives to be an inclusive place in fandom, as difficult as that can be, and racist and bullying behavior is not acceptable at our Worldcon. This expulsion is one step towards eliminating such behavior and was not taken lightly. The senior staff and board are in agreement about the decision and it is final.

Kevin Roche is the chair of Worldcon 76 in San Jose. Kevin has been making costumes since he was 8, and continues dressing funny to this day.

Personally, I think it is great that the Funny-Dressing Nazis of Worldcon have taken the important first step of banning this straight male author from attending, and I look forward to seeing them take the obvious next step of banning all men and women who are not sexually dysfunctional, don’t wear Star Trek uniforms, and shower more than once per week, and finally transform Worldcon into the loving, age-equalitarian utopia it is meant to be.

I understand the theme of Worldcon 76 will be “An Homage to Marion Zimmer Bradley” which will feature the announcement of a new award, The Bradley, which will be presented to the science fiction author who has done the most to advance the vital cause of sexual abnormality in the previous year. The trophy will be a bronze statuette of a crying little girl clutching a teddy bear.

Nominees for the 2017 Bradley Award will be announced in April.

Because, after all, we all know they certainly don’t celebrate Christmas. Anyhow, this may be the most SF-SJW headline ever seen at File 770. Or, possibly, anywhere.

Just wait, it gets even better.

In a special treat, and fighting bronchial problems, she shared the revised version of an unpublished short story, at present entitled “Give Me Cornbread or Give Me Death.”  Continuing the evening’s dystopian theme (where was the season’s merry jollity?), we were shown a future where the powerful inhabitants of Towers dominate, ruling by fear and dependency, and have genetically tweaked frogs (as in the Plague in the Book of Exodus) into drug-sniffing dragons.  Rural black raiders, however, have co-opted the dragons, diverting them from eating dark-skinned people with what sounded like soul food (this is a serious story, she reminded us).

Ladies and gentlemen, your two-time winner of the Hugo Award for Best Novel! Let’s hope she can make it three straight in 2018!