2018 was an unusually challenging year. It was full of deplatformings and bannings, disruptions and disqualifications. It saw the end of Alpha Game due to a lack of interest on my part and it failed to see the final publication of A Sea of Skulls due to a lack of time and focus on my part. It saw the collapse of the Amazon ebook market and a concomitant step backward for Castalia House. On the plus side, it also saw the publication of nearly 30 new comics from Arkhaven and Dark Legion and forced us to take structural steps that should provide a stronger foundation for future growth.


The biggest blog news in 2018 was the unexpected retro-cancellation of the successful Alt★Hero:Q crowdfunding campaign by Indiegogo, which not only led to the creation of our own comics site complete with a store and crowdfunding engine, but a successful replacement campaign that raised 42 percent more net than the original cancelled campaign as well. Thanks very much to all 1,657 backers who made that possible!

Another success was the return of Voxiversity and the development of its ancillary Darkstream, which is now averaging 8k views per stream. Look for further advances on the video front in 2019 thanks to the strategery of the Foundation.

We will have some very big announcements in the first two months of the new year, including the introduction of Infogalactic’s first social component. On a personal note, I expect to publish Corporate Cancer by March and A Sea of Skulls in print before June. And I’m very, very pleased to be able to announce that Jeremy Daw has literally just completed the massive task of narrating A Throne of Bones; the audiobook, which we anticipate will exceed 40 hours in total, should be available on the Arkhaven store before the end of March if everything proceeds according to plan.

Thanks to everyone who continues to read VP and to everyone who supports one or more of the various endeavors that have emanated from it. Thanks especially to the Infogalactic Burn Unit, the Alt★Hero backers, the Castalia volunteers, the Brainstorm crew, and the Arkhaven team, all of whom have come together in a spirit of creative cooperation to make these various projects viable. Your participation in these things is invaluable and very much appreciated.

Of course, it would not be an annual traffic report without that old standby, the comparison of VP’s annual traffic to that of the Most Popular Blog in Science Fiction. Some things never grow old. And the ride never ends. 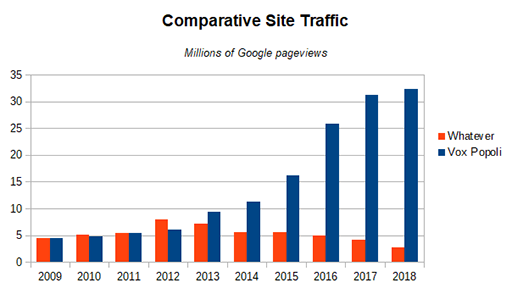 2016 was an absolutely extraordinary year. 2017 was considerably less explosive in terms of traffic growth, and was even a step backwards in several regards, but was nevertheless important due to a number of structural revisions being made behind the scenes that will provide a stronger foundation for future growth in the coming year.

In August, I stepped away from blogging at Alpha Game, due to a lack of time and a growing lack of interest in the subject. I’ve learned what I wanted to learn and said what I wanted to say about intersexual relations; if I happen to write more on the subject, it will probably be in the form of a book. Lee Jackson has picked up the slack at AG and has already turned it around, so I’m glad to see that the community there will remain active.

The biggest blog news in 2017 was the unexpected magnitude of the success of the Alt★Hero crowdfunding campaign. As a result, we’ll be introducing two comics imprints in 2018, Arkhaven and Dark Legion. Arkhaven will be the comics and graphic novels that we produce ourselves, while Dark Legion will be our vehicle for publishing comics and graphic novels produced by others.

Castalia House expanded from 65 titles to 96, with 38 titles available in print and 24 in audiobook. Book sales increased 40 percent, with print accounting for 16 percent of the total. Infogalactic had some ups and downs as far as stability was concerned, but it is still going strong as we work towards the release of the DONT PANIC engine, while Infogalactic News and Infogalactic Tech were launched and have grown steadily in popularity. On the downside, Brainstorm was essentially shut down midway through the year due to GoToWebinar shenanigans following the sale of the company, which is why we’re going to move it to a different voice-only service this month. And we didn’t quite manage to launch Voxiversity in 2017, but we will do so soon.

I’ve also begun blogging more often at DevGame, since we’ll be launching four games there this year and probably doing one game-related kickstarter this summer that should be of considerable appeal to strategy gamers. For more information about that, be sure to visit DevGame from time to time in the new year. We will also be launching a complete site redesign of Castalia House in 2018, including dedicated forums and wikis.

Thanks to everyone who continues to read VP and to those who support one or more of the various endeavors that have emanated from it. Thanks especially to the Infogalactic Burn Unit, the Alt★Hero backers, the Castalia volunteers, and the Brainstorm crew, all of whom have come together in a spirit of cooperation to make these various projects viable.

2017 was a year for building foundations that should lead to constructive consequences in 2018. Of course, it would not be an annual report without a resort to our old comparable with “the most popular blog in science fiction.” Since I’m no longer the primary blogger at Alpha Game, I have removed it entirely from the equation. Gammas are certainly free to posture as they will, but the facts are the facts, however uncomfortable they might be. As for other metrics such as movies and whatnot, well, we haven’t even begun exploring those arenas. But I expect we will, in time.

And I anticipate that what we will do there will be very similar to what we have done here. The ride never ends. 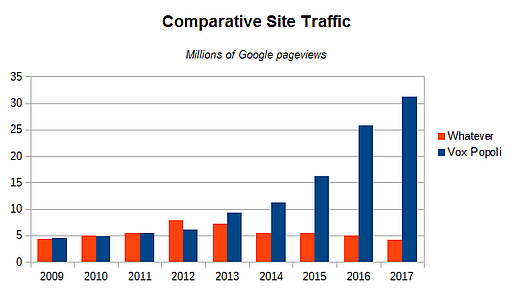