/pol/ wants to know why I’m confident that Trump, and not Biden or Harris, will be the President of the United States for the next four years.

This guy gets it.

Basically, Trump’s EO shows he knew the voter fraud was coming, and he was getting ready to catch it. If you can accept he knew it was coming, and had Mil Intel at his disposal, it is very unlikely you aren’t looking at Trump’s plan.

People today have no idea how surveillance tech has advanced, because it has all been blacked out from back when you needed to get in a room to bug it if you wanted to listen. Now, they are listening to people breath in another building, without ever going near it.

With that kind of intel, and knowing what was coming, it is unlikely Trump will lose. Plus, given he was thinking about it, my bet would be he viewed it as a problem which needed a shocking, long-term solution. It was not just a speed bump he had to get over. Remember Trump has to live in the US after his Presidency. If he left the vote fraud in place, and Cabal just took over after he left, he and his family would get Kennedy’d fast as a message to others.

If you look at the whole thing, the only way all the pieces fit together is Trump was ready for this, and he will end up in office.

Moreover, the God-Emperor Donald I is not acting like a man who believes he lost. Nor is Creepy Joe acting like a man who believes he won. And the media’s behavior, to say nothing of the behavior of the corrupt Republicans, is entirely consistent with the Trump Wins scenario. At the end of the day, you are faced with two choices. One is what President Trump has been consistently telling you. The other is what the mainstream media has been incessantly shrieking at you. And the one thing we know, beyond any shadow of a doubt, is that the only scenario we can be absolutely certain is false is the one that the mainstream media is pushing, because the Official Story is never true.

Now, the mere existence of a plan does not mean that it will be successful. The enemy always gets a vote and no plan, no matter how well gamed-out it is, can be reasonably expected to perfectly anticipate all of the enemy’s moves. But the elements of the plan that have been exposed to our view to date do not indicate an inept or mediocre planner whose efforts are likely to fail behind it. To the contrary, they show signs of a strategic mind that may even rival some of history’s greats.

There are clear and unmistakable indications of a great political double-envelopment in action. It may or it may not succeed; Hannibal could have failed at Cannae if the Roman infantry had been able to break the Carthaginian center after the massive trap was sprung upon them. Or one of his subordinate commanders could have lost his nerve and failed to give the necessary orders to close the trap at the right time. But at this point, it is hard to imagine any of the primary players losing their nerve when the plan is playing out, the traps have all been laid, the enemy has dutifully entered them en masse, and the end game is in sight.

At the end of the day, it’s just pattern recognition. Because no matter how confusing or inexplicable the various pieces of the puzzle may appear to be, they are neither random nor are they unrelated. They all – well, those that are real, anyhow – they all have to fit together somehow. Here is one pattern that looks familiar in the current context. 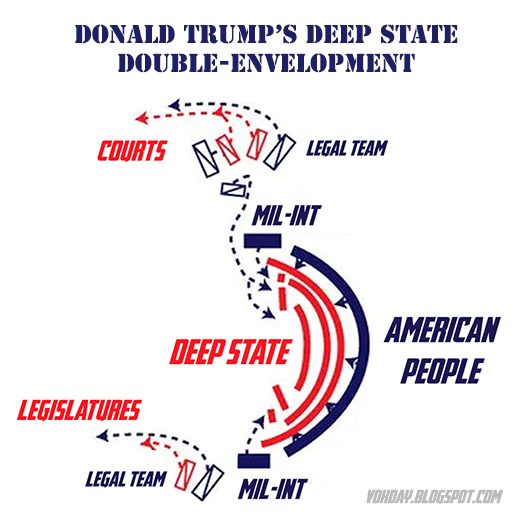