I don’t think Princess Nut Nut’s new regime is long for this world, based on the inability of its new Press Secretary to stand up to what can’t even reasonably be described as criticism:

The woman appointed by Boris Johnson to lead his daily press operations was left in tears on Saturday after she claimed to have been the subject of negative briefings by a former No 10 official who resigned last week and made a dramatic exit from Downing Street.

In an extraordinary escalation of feuding involving new and departing aides to Johnson, friends of Allegra Stratton, the new press secretary to the prime minister, said she had been “in tears all morning” as a result of what she believed were critical briefings by Johnson’s former director of communications, Lee Cain.

Stratton, who will be the public face of the government, believes Cain told numerous journalists over the previous 24 hours that she was not the first choice for the job and had not been top of the list of a panel chosen to make the high-profile appointment.

Messrs. Putin and Xi must be laughing themselves sick over what presently passes for the once-powerful governments of the USA and the UK. And the EU is going to be licking its chops over “negotiating” the final Brexit deal with these sacrificial lambs. 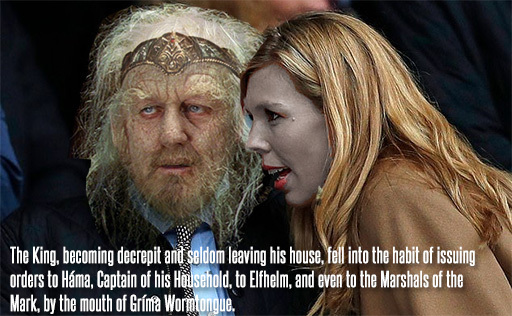 UPDATE: And now we know why they call her “Princess Nut Nut”. Kee-rikey!

Miss Symonds was said to be livid at a report in The Times which claimed that she no longer liked the animal. She went on Twitter to denounce it, saying: ‘Total load of c***. There has never been a happier, healthier and more loved dog than Dilyn.’

The dispute with Mr Cummings and Mr Cain flared when Miss Symonds apparently asked Mr Cain to make a formal complaint to The Times via the press watchdog, IPSO.

He refused to do so, pointing out that a Covid crisis meeting was about to take place in No 10 that day. Miss Symonds is understood to have contacted officials in Mr Johnson’s office and told them to scrap the coronavirus meeting because she wanted the Prime Minister to help her pursue her complaint with The Times. When Mr Cummings found out, sources said, he stormed in to Mr Johnson’s office and told him to go ahead with the meeting – which took place as planned.

An insider claimed: ‘We were dealing with the extraordinary chaos of Covid, and Carrie f***** the (PM’s Downing Street) private office up for a whole day. All over something trivial about her dog. She went bananas and spent the day on the phone to officials and the PM trying to force the Government machine to IPSO (send a formal complaint to the watchdog) The Times over it.’

So much for those Churchillian aspirations….