Having just laid off one-third of its employees, DC Comics is now determined to discover how fast it will have to lay off the next one-third. We are informed that Batman will no longer a rich white guy, Bruce Wayne, but will instead be a righteous black man, Lucas Fox.

In September 2019, Bleeding Cool first reported that DC Comics was to give us a new black Batman to replace Bruce Wayne in the comic books., and then learnt it would be Luke Fox, son of Lucius Fox. We then learnt it would be would be written by John Ridley, screenwriter of 12 Years A Slave and part of 5G, or Generation Five, a publishing event led by publisher Dan DiDio to replace all the lead characters in the DC Universe and have them aged up, introducing a new generation to DC Comics. however, earlier this year, Dan DiDio was fired as publisher and 5G was pushed back. The shutdown caused by the coronavirus pandemic underlined this as 5G was shrunk from the mainstream DC Universe to, as we learnt, an imprint.  But of course, none of this had been announced and some people still thought Bleeding Cool made it all up.

At the Batman Legacy panel at DC Fandome today, Jim Lee introduced John Ridley who talked about writing a new Batman series, with Nick Derington, bets known for his work on Mister Miracle, Batman Universe and Doom Patrol. The comic book will, as John Ridley put it “a slightly greater than 47{fb585635b9f6189e33442b25caac15ec2544d7054f182b4f92840c6cee65accd} chance that he will be a person of colour” and that he will be using the comic to “delve into the Fox family” and that “Lucius Fox has been at Batman’s side the longest.” So… Luke Fox as Batman.

DC Comics Publisher and CCO Jim Lee has since confirmed the plan to transform Batman into Blackman. So, it strikes me that this is probably a very good time for Arkhaven to be introducing Shade, a very rich Austrian aristocrat who fights crime as part of the Global Justice Initiative. 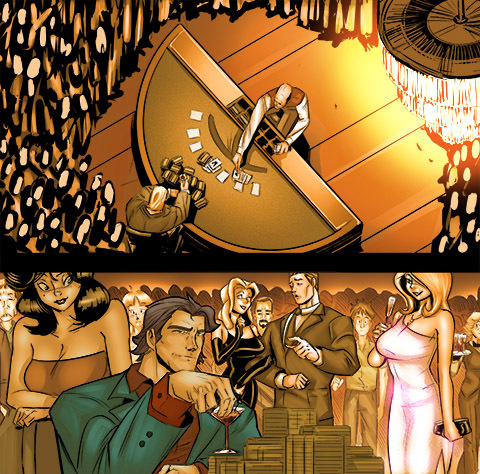