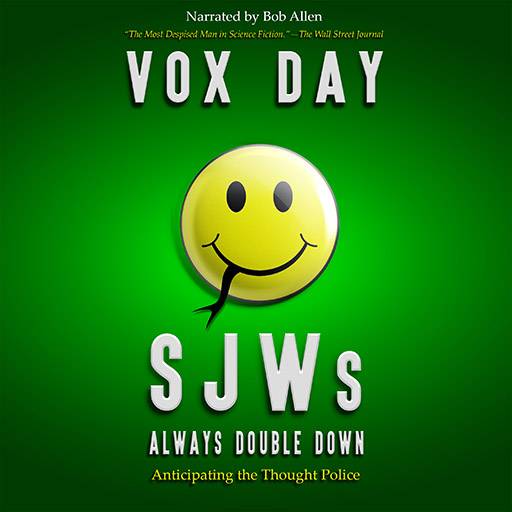 If you haven’t read SJWS ALWAYS DOUBLE DOWN yet, now is an excellent opportunity to pick up both the audiobook and the ebook in your favored format at the same time.

Whether you realize it or not, if you live in the West, you are currently engulfed in a civilization-wide cultural war that is taking place all around you. Maybe you’re aware of it, or maybe you’re not. It doesn’t matter. The cultural war is real and it is vicious. And unlike a traditional shooting war between different nations, in a cultural war there are no civilians. There are no neutral parties, since no fence-sitting is permitted, and there is no common ground to be found. No one is permitted to sit it out or refuse to take sides; sooner or later, you are going to be forced to declare yourself by either publicly submitting to the SJW Narrative or openly rejecting it.

The book is named after the Second Law of SJW: SJWs always double down. SJWS ALWAYS DOUBLE DOWN is a much-needed guide to understanding, anticipating, and surviving SJW attacks from the perspective of a man who has not only survived, but thrived, after experiencing multiple attempts by Social Justice Warriors to disqualify, discredit, and disemploy him in the same manner they have successfully attacked Nobel Laureates, technology CEOs, broadcasters, sports commentators, school principals, open source programmers, and policemen.

Written by Vox Day, Supreme Dark Lord of the Evil Legion of Evil and bestselling political philosopher, and featuring a foreword by Ivan Throne, SJWS ALWAYS DOUBLE DOWN is a vital weapon in the cultural war against the thought police.

The audiobook is narrated by Bob Allen and is 6 hours and 34 minutes. High-quality DRM-free MP4 format. $14.99. For the current audiobook catalog, click here. More will be added on a regular basis.