The second issue of Quantum Mortis picks up where the first issue leaves off and finds our heroes continuing their investigation of the murder of Arpad Vladislaus Jagaelleon (that’s his real name). Tower and Hildreth get more to do here and we are introduced to a plethora of colorful characters, which is a nice change of pace from issue #1. Characters are better fleshed out and the mystery continues to build in intrigue in a follow-up issue that while still isn’t a perfect five-star hit, manages to improve on its predecessor in every way.

Things start out oddly contemplative. Tower enjoys a nice, long conversation with his augmented reality implant, Baby, about the nature of life and death. They bring up some deep questions and even mention being “saved by the Blood of the Lamb” which is a distinctly Christian phrase that I’m not used to hearing outside of my church walls. It’s not a Christian book by any means, but it’s nice to see something like Christianity mentioned in a comic book and it not being used as a joke or demonizing it, as seems to be the popular route to take these days. 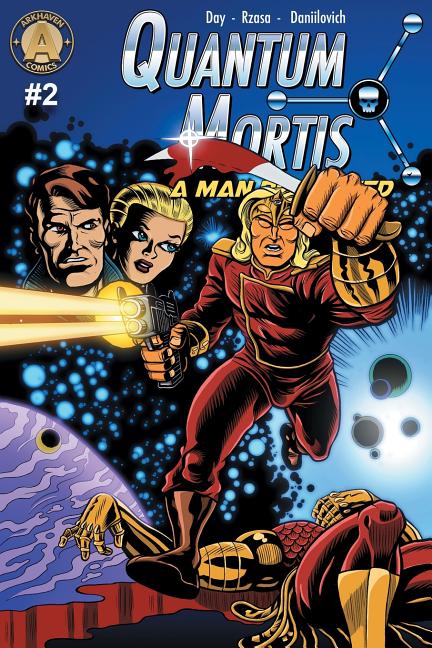 It’s great to see that they liked this one even better than the first one! Read the whole thing there. In other Arkhaven news, we have signed an agreement with a movie producer, about which more anon, and we will have an announcement about a major new comic campaign that we will be supporting soon.

And just because I have been asked this several times, we will not be doing another Alt-Hero comics campaign until we have published at least six issues of Alt-Hero, six issues of Chuck Dixon’s Avalon, and sent two omnibuses out to backers. There is no point in building up more of a production backlog, especially when we have barely begun to assemble our sales infrastructure, about which we will have a significant announcement next week.

UPDATE: I am very pleased to be able to announce that QUANTUM MORTIS A Man Disrupted #2: Zero Zero Tango is now in print and is already available at the Castalia Books Direct store for $2.99. It should be available on Amazon by the end of next week. This is the gold logo edition, which is being produced in a limited quantity of 2,500.