The guard-dog media is ramping up its attacks on Qanon, just like they did on Pizzagate once the heat began to reach the guilty parties. 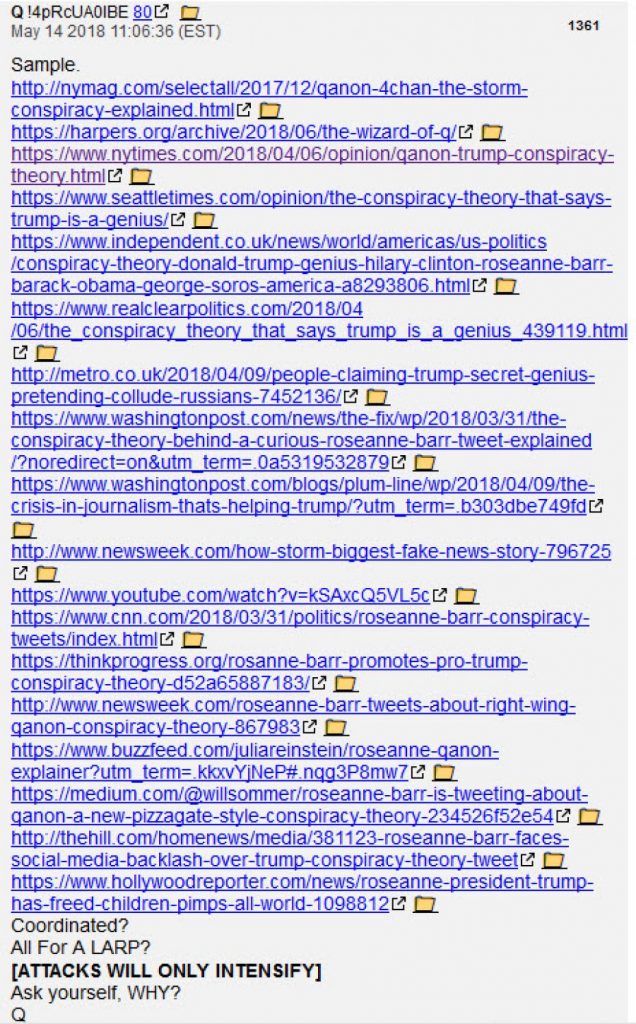 Who or what is QAnon? Just asking that question sucks you into a world that’s like Pizzagate on bath salts, a galaxy-brained, 4chan-bred conspiracy theory that has apparently convinced an alarming number of adults that all kinds of preposterous things are true.

The whole mess started on October 28, when an anonymous user going by the handle “Q” started a thread on 4chan’s /pol board titled “The Calm Before the Storm.” In a series of posts, Q claimed to be a high-level government employee with Department of Energy Q clearance and access to Top Secret–level information about Donald Trump, the Democrats, and the hidden big-picture machinations of the US government.

Wielding the plausible-enough-sounding details and sprawling shadow government plot of a lesser Dan Brown novel, Q began slowly painting a picture of a reality far different from the one we live in. The resulting QAnon conspiracy theory states that Trump is not under investigation by Robert Mueller. Instead, Trump is merely playing the part of hapless conspiratorial criminal while covertly helping the special counsel pursue their true quarry: Barack Obama, Hillary Clinton, John Podesta, and all the other liberal boogeymen. (It gets a LOT crazier than that, but that’s the core plot.)

All of this was spelled out through cryptic hints, which seems to be half the fun for people who get into it. Before long, there were countless YouTube channels, subreddits, and message boards dedicated to collectively piecing his hints together with digital red string. One QAnon-based subreddit has more than 31,000 subscribers. On YouTube, QAnon-themed videos can have tens of thousands or even hundreds of thousands of views. It’s even bled out into the real world, with conspiracy theorists claiming they had found pedophile camps in the Arizona desert. So this nonsense isn’t likely to go away any time soon.

The reality is that while not everything related to Pizzagate and Qanon is true – there are false trails and erroneous connections that are being drawn due to the incomplete nature of the information being uncovered – the general gist of it is true and there is far more that has yet to be uncovered due to the wide-ranging nature of the situation. Even those who have come into contact with an aspect of the sprawling evil that is the elite globalist network have no sense of its scope, much less a holistic grasp of the whole series of enterprises.

That’s just one of what are now hundreds of “coincidences” that few believe are coincidences anymore, the media’s attempts to ridicule those drawing the connections between them notwithstanding. But the truth will come out eventually, and the historical misbehavior of corrupt elites strongly suggests it will be a lot closer to Pizzagate and Qanon than the whitewashed, noble image presented by the corrupt, leashed, and well-indoctrinated media. Indeed, the conspiracy theory of history is the only coherent and consistent theory of history.