Strange, that Rod Dreher seems to think so, but he doesn’t grasp that it is only the foundation built upon the rock that will stand:

I heard from a friend this morning who told me a story about a family we both know. A solid white working-class family. In the youngest generation, they’ve started falling apart in a way that will be hard to fix. It’s the usual Charles Murray Coming Apart thing: the loss of being bound by a sense of religious or traditional moral obligation, followed by a loss of a sense of the importance of marriage, especially for childbearing, and on down the line. Maybe they’ll pull out of this spiral, but odds are against them. I would bet money that some of them are thinking of the trouble they’re in as something that just happened to them. It’s like people who live in a nice house, but who wake up one day to discover that the yard has turned into a jungle of weeds, and the roof is leaking, and termites have eaten out the walls … and they wonder who came overnight and destroyed their nice house….

No social species can survive if its men (and women) are too drugged out and undisciplined to hold a job. No social species can survive if its people cannot make the adaptive imperatives that Wade Davis says all cultures must make. My dad was a civil servant and my mother was a school bus driver. My folks never had much money, and were, as I see now, living much closer to the edge than they let us know as kids. They didn’t want to burden us with anxiety. I also understand why my father instinctively imprinted the same taboos on his children. His basic code was:

You will note that “God” is not in this list. He believed in God, but his God was pretty much the transcendent guarantor of this code, and nothing more.

The problem is that there are too many who want to cut down the tree but keep living in the tree house. They don’t understand that it simply isn’t going to float there in the air by itself, but without the tree, it will fall to the ground, be smashed to bits, and badly harm everyone inside it. This is not a mystery. The descent of the modernists is the descent into post-Christianity and societal self-destruction. And the fact that the modernists are opposed to their natural successors, the post-modernists, does not make them on our side. 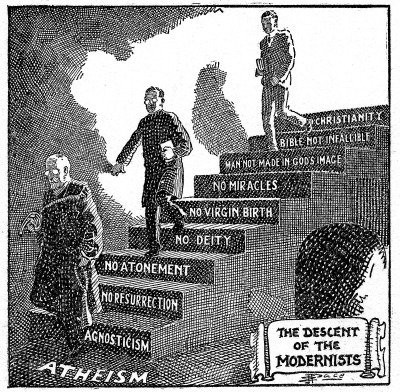