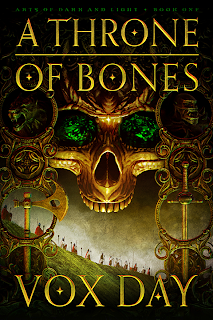 In Selenoth, the race of Man is on the ascendant. The ancient dragons sleep. The ghastly Witchkings are no more; their evil power destroyed by the courage of Men and the fearsome magic of the Elves. The Dwarves have retreated to the kingdoms of the Underdeep, the trolls hide in their mountains, and even the savage orc tribes have learned to dread the iron discipline of Amorr’s mighty legions. But after four hundred years of mutual suspicion, the rivalry between two of the Houses Martial that rule the Amorran Senate threatens to turn violent, and unrest sparks rebellion throughout the imperial provinces.


In the north, the barbarian reavers who have long plagued the coasts of the White Sea unexpectedly plead for the royal protection of the King of Savondir, as they flee a vicious race of wolf-demons who have invaded their islands. And in the distant east, the war drums echo throughout the mountains as orcs and goblins gather in vast numbers, summoned by their bestial gods.
Epic fantasy at its deepest and most gripping, A THRONE OF BONES is Book I in the ARTS OF DARK AND LIGHT. DRM-free.
The 924-page monster is also a free download for the next four days. If you’ve been holding off on dipping your toe into the murky waters of Selenoth, this would be the time to jump in. Of course, no matter how excellent, an ebook is no substitute for the beautiful hardcover or even the imposing paperback.
From the reviews:


Don’t forget that Book II of the ARTS OF DARK AND LIGHT, A SEA OF SKULLS, is a finalist for Best Fantasy Novel in the 2017 Dragon Awards. Or our new release, the brutally funny THE PROMETHEAN, which is presently the #1 bestseller in Satire.