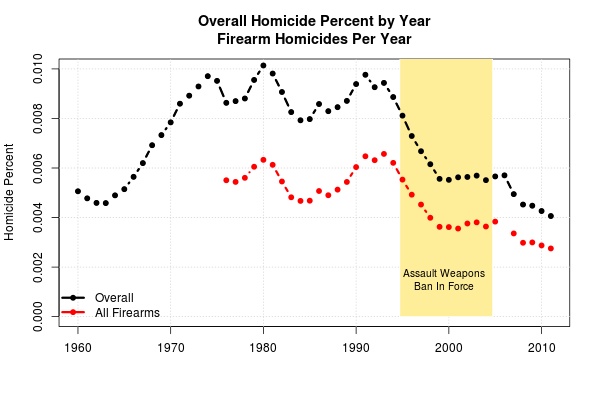 “The first notable is that the two rates track closely, so that
whatever is driving changes in the one is likely (but not certainly)
driving changes in the other. The second remarkable feature is the
abrupt increase in the turbulent 1960s, and the subsequent decline as
the people responsible for these cultural excesses began to enter their
50s and 60s, and even to die off in the 2000s and 2010s. The percent in
2011 was the lowest on record.  I want to repeat that: The homicide rate in 2011 was the lowest on record since 1960.”


Now ask yourself this question.  Since homicides and firearm homicides have already been dropping for more than 20 years with or without the assault weapons ban, why are various government officials suddenly so desperate to disarm the American people?

Karl Denninger explains the mystery:  “The people on the left are telling you in plain English that if you disarm you will be slaughtered.  Exactly as occurred in Germany, in Rwanda, in Guatemala and in countless other parts of the world.  These people are not anti-gun.  They are only against you being able to defend yourself against them, and they intend to kill you if you first disarm and thus make it possible for them to do so.  That’s the history of the “anti-gun” people worldwide over the last 100 years and it is happening again right here, right now, today, in America.”

He is right too.  No one ever wants to believe that their elected officials or their fellow citizens literally want to kill them.  But considering how many times it has happened throughout human history, and how many times it happened in the 20th century alone, the American people would have to be blitheringly stupid to imagine that those attempting to disarm them are doing so for any reason except to be able to kill them at will.

That doesn’t mean they actively want to kill anyone today.  They merely want the option in case large quantities of people don’t fall in line with their demands.

So, buy a gun today.  Buy one for your friend who won’t get it until they can’t be legally acquired anymore.  And don’t let anyone take them from you, for any reason.